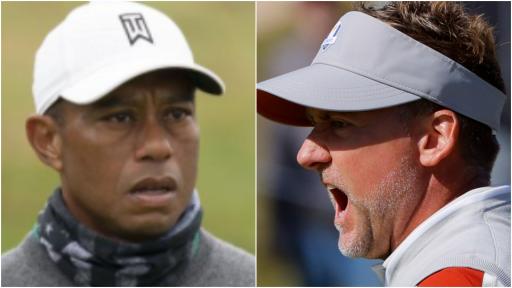 Haney, who published his 2012 memoir 'The Big Miss', writes that Woods once sent a "rude text" to him about European Ryder Cup star Poulter.

Woods did not always see eye-to-eye with a number of players on the PGA Tour, but he was particularly cold when it came to the Englishman and his fiery exploits out on the course.

"Those he genuinely liked tended to be quiet, modest, hardworking guys like Jim Furyk and Steve Stricker, whose ability he respected but whose talent didn’t elevate them to the position of serious rival," said Haney.

"He kept the super talented at a distance. He didn’t want players who could be a threat to feel comfortable around him.

"He was averse to certain players, especially if he felt their records didn’t warrant all the talk. He wasn’t a fan of Ian Poulter, for example."

RELATED: BRYSON DECHAMBEAU ON HIS RELATIONSHIP WITH TIGER WOODS - "HE IS MY DAD"

Haney then spoke about a time when Poulter "somehow ended up getting a ride on Tiger's plane back to Orlando where he lived" after the US Open at Oakmont in 2007.

Woods did not want much to do with Poulter by the sounds of it.

"Tiger stretched out on his regular spot, in the two seats in the front of the plane, and immediately put on his headphones," said Haney.

RELATED: TIGER WOODS SPOTTED BACK ON THE GOLF COURSE - IS THE COMEBACK ON?

"That left me to talk to Ian, which I didn’t mind because I got along with him.

"As we were conversing, Tiger texted me a rude message about Ian. As far as I know, Ian didn’t get any more rides."

Haney worked as Woods' coach for around six years before resigning in 2010.

RELATED: TIGER WOODS SPOTTED WITH "HOT BLONDE" BY THE POOL WHILE HE RECOVERS FROM INJURY

According to the PGA Tour coach, most players knew Woods liked to be by himself while he was in the zone, especially during competition rounds.

"Most players understood Tiger had to have a killer mind-set to be as good as he was, and going out of his way for other people wasn’t part of the equation," added Haney.

"So even when distant, there was more respect for Tiger than dislike. In his own way, he was being up-front. They didn’t know him, but they realised he really couldn’t let them."

NEXT PAGE: OLYMPIC PHYSIO SAYS HE WOULD BE "ASTOUNDED" IF TIGER WOODS MAKES THE MASTERS