Tiger Woods has revealed the funniest thing that was ever said to him on a golf course during a quickfire interview promoting The Match. 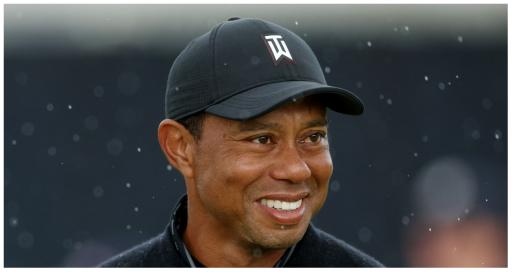 Tiger Woods has revealed the funniest thing a fan ever said to him on the golf course.

In a quickfire flash interview promoting The Match this weekend, Tiger revealed he was once asked by a woman to sign her chest.

Tiger cracked a wry smile as he revealed the security guard told her to "put that away" before he chimed: "Nothing happened!"

Related: Charlie Woods has no time for JT's banter

Woods was also asked the best non-professional golfers he has ever played with.

Elsewhere in the brief exchange, Tiger said his favourite snack on the golf course is a peanut butter and banana sandwich.

When asked to pick his dream four players he would love to play a round of golf with, Tiger said he could only think of three.

"My dad, myself and Charlie," Woods said. Tiger and son Charlie Woods have now given their first ever joint interview, which will be aired before The Match this weekend.

Who’s the best celebrity golfer Tiger has ever played against? #CapitalOnesTheMatch goes down Dec. 10 on TNT pic.twitter.com/59x922uIJS

Tiger will team up with Rory McIlroy at Pelican Golf Club. The duo will taken on the all-American pairing of Jordan Spieth and Justin Thomas playing a match over 12 holes.

Before the Hero World Challenge, Tiger spoke highly of McIlroy's leadership amid the disruption of the breakaway LIV Golf League.

"What Rory has said and done are what leaders do. Rory is a true leader out here on Tour. The fact that he's actually able to get the things he said out in the public eye, be so clear minded with it and so eloquent with it, meanwhile go out there and win golf tournaments on top of that, people have no idea how hard that is to do, to be able to separate those two things.
"But he's been fantastic. He's a great leader in our calls we make and he's a great leader with all the players out here. Everyone respects him and they respect him because not just his ball-striking, his driving, but the person he is."

One player who won't be involved in this edition of The Match is Phil Mickelson, who has been booted from the franchise owing to his association with LIV Golf.

Next page: Tiger Woods on getting inside Charlie's head