PGA Tour pro Davis Riley explains in detail what went so wrong at the fifth hole and what he would do differently. 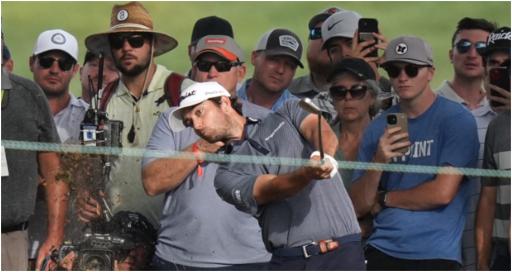 PGA Tour pro Davis Riley admitted he tried to play the "perfect shot" during a debacle at the Valspar Championship which led to a devastating triple bogey.

Riley pegged it up on the fifth hole on Sunday with a two shot lead over the field at Innisbrook Resort which included the deadly Sam Burns and in-form Justin Thomas, but by the time he finished the hole he was the chaser.

The 25-year-old rookie was looking for his first win. He was previously described as world class by the aforementioned Thomas but his fifth hole at the Copperhead Course was the stuff of nightmares.

His drive was poor and ended up left of the fairway, next to the sixth hole. His second shot was similar to his first and ended up near the tee box on the eighth hole.

Riley got a drop from some signage but chunked the third and still had a short pitch of 70 yards to the hole. But his misery wasn't complete. He had to take an unplayable lie.

His fifth shot was punched over the green. His sixth shot back across the dance floor ran past the pin and onto the fringe. It took him two more shots to get the ball in the hole. That eight on the scorecard looked so ugly.

How exactly did Riley see it from his perspective?

He said: "Yeah, I just hit a bad tee shot and then from there it was just kind of a cluster.

"It was just, I didn't really have any room to go right unless I went out sideways and left myself 290 yards to the green.

"So I, honestly, just tried to go up left and tried to hit it on one of the tee boxes, but I had kind of a weird, above my stance sitting down in the rough lie, and it just came out a little left and hot.

"Then, yeah, honestly, I think where it went wrong was after I dropped, got the relief from the tee box, the tee marker, yeah, it was just sandy, kind of weird grass over there, and maybe I just tried to hit too much of a perfect shot instead of making sure I blast it over the green and give myself just an up and in at par."

He continued: "Then I just kind of, I don't know, it was just a tough shot. It's just so sandy over there and it's thin. You really have to make perfect contact to even get the ball that far.

"But if I had to do it over again maybe just make sure I get it long instead of trying to get it on the green, almost just take long and try to get up-and-down.

"It was weird, just because where I took the drop I couldn't take a direct line at the pin.

"And that's why I think the contact was why it was because I was having to come from the inside and it was just shallow.

"And on that sandy kind of turf it had to be perfect contact or it was going to come out super soft like it did."

Walking off the green, Riley said he told his caddie that "there's a lot of golf left", adding: "It was not like I really shot myself out of it."

That final round will sting a bit for Riley, who had previously gone 65-68-62 to draw plaudits from the golf world.

Still, he was not to be deterred. He was pleased to see his friend Burns win his third PGA Tour title. A "hell of a player" he said.

He said of Burns: "Any time you give someone like that who is playing well within 30 feet you always think there's a chance, so I kind of went into there thinking he was going to give it a really good run.