Bubba Watson has explained what was going through his mind as he tied the course record at the PGA Championship. 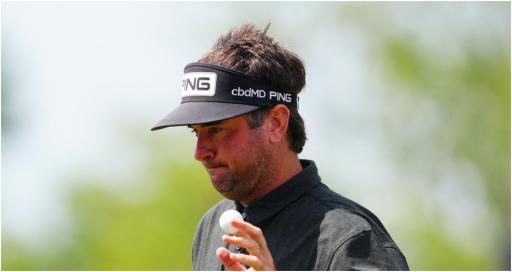 Bubba Watson joked he was feeling in the groove so much that he was "aiming for the rough" because he had not visited it all day as he tied the course record at Southern Hills on Friday at the PGA Championship.

Related: Bubba Watson hits one of the most spectacular recovery shots ever

Watson rolled back the years with a superb 7-under 63 in Oklahoma. And the scary thing about it was that really could have been lower.

Whilst Justin Thomas plotted his way round the undulations and flighted shots into the greens after flexing with Bones, Watson was at his most creative and smashing his driver off the tee.

The 43-year-old lefty was in fact two strokes better on the day than the 36-hole leader Will Zalatoris.

Watson made three birdies on the front nine and only dropped a shot at the par-4 third. He made five more birdies down the stretch, only making bogey at 14.

At 18, the 471-yard par-4 behemoth, the two-time Masters champion had a putt for the course record but the 22-footer just went past the edge of the cup.

If he had made it, that score would have equalled Branden Grace's all-time major championship record set during the 2017 Open at Royal Birkdale.

Watson said: "Don't get me wrong. It's an honour to be able to shoot 63 on any golf course. I mean, I'll take it. But I've got to look forward to tomorrow and see where I'm at and hit hopefully just as quality shots as I did today."

Perhaps his incredible score was down to an equipment change? Watson revealed that as he's "older" now he's switched up the shafts in his driver.

Now he is using a 60g driver shaft in his PING driver whereas before he was using a 90g one.

Was this one of the best ball-striking rounds he's ever had?

"Yeah, it's up there for sure," he said. "It was funny, I told my caddie on 13, I told him I was going to hit it in the rough because I wanted to get that out of my head.

"I hadn't missed a fairway yet, and I didn't want to go to 17 or 18 having a chance to hit every fairway.

"[I] chipped it down and still made birdie, so it worked out good."

Watson is two back of Zalatoris at 5-under par going into moving day. The weather forecast for round two did not look great, with thunder storms predicted.

Justin Thomas, Mito Pereira,  Rory McIlroy, Abraham Ancer and Davis Riley make up the rest of the top-5 after 36 holes.