Alex from GolfMagic reviews the best irons of 2020 for players that have a low handicap, and gives our top 5 in this showcase video. 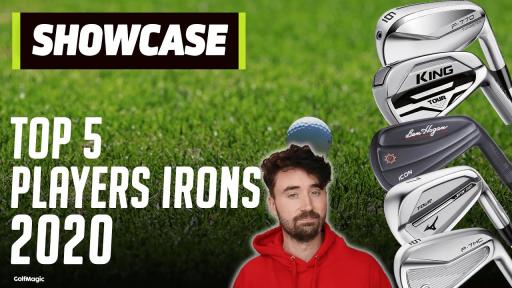 There have been some stunning irons launched in 2020 and we've been lucky enough to get our hands on pretty much all of them and put them to the test, but which irons are our favourites for low-handicap golfers?

In the video below, GolfMagic's Alex Lodge reviews our top five 'players' irons of 2020, so if you're a single-figure handicap golfer looking for some new clubs this Christmas, one of these could be exactly what you're looking for. Watch the video below and if you like what you see, head over to our YouTube channel to subscribe:

After testing the P7MC irons at Farleigh Golf Club, the GolfMagic team was extremely impressed with the feel and performance of the new irons. Although the thicker cavity does provide players with a little more forgiveness, these irons are still designed for low handicap players and TaylorMade Tour players, so if you're looking for maximum forgiveness, these aren't the clubs for you. The irons felt pure out the model and they were extremely responsive with mishits. The workability of the P7MC irons was something we really liked about them, so if you place a premium on shot-shaping, you'll definitely be a fan of these irons.

The shorter irons feature a narrower sole for improved turf interaction while a thicker cavity pad throughout the set, evolving from Mizuno’s study of vibration patterns, produces a harmonic impact that can be felt for a fraction longer.

There are very few negatives with this club, if any. The bank balance shudders in a way with these clubs when you consider its overall price (£795 RRP) at nearly half the price of some of its competitors. The looks are as good as anything out there in the player iron market, and we love the black finish, which is particularly durable. Its performance is second to none. We would not recommend these irons for anyone in double-digit handicaps, it's very much one for the better ball strikers out there. But if that's you, then we highly recommend you give these a closer look this season. They play well, they perform well, and they look and sound incredible.

Building off the popularity of its KING MIM Wedges, COBRA is applying MIM Technology to a full set of irons for the first time and reinventing the way premium irons are designed and manufactured.

We found these irons to be super-forgiving for a players iron, something you don't tend to see in the players category and we expect these to fly off the shelves (available October 30).

Only carrying the name of the previous generation, the newly released P•770 iron represents a new level of aesthetics and performance within the TaylorMade line up.

Constructed from a forged hollow body with SpeedFoam™ injection and advanced tungsten weighting, this latest model is more akin to its powerhouse sibling the P•790.

We absolutely loved the feel and performance of these irons. The TaylorMade P790's are one of the most popular irons on the market, so to have that power and feel but in a smaller profile makes the P770 the perfect iron for low-handicap golfers.