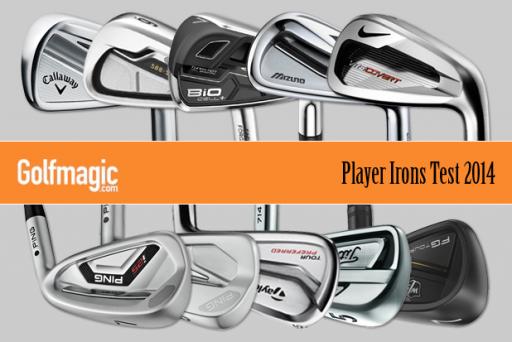 IN the fifth instalment of the 2014 Golfmagic Club Test series, we survey ten top-end player irons launched within the last 12 months.

What is a player iron?

A player iron is predominantly suited for the mid-to-low handicapper. The better player iron typically provides a clean, classic appearance with a thinner topline in comparison to a game improvement iron.

Better players and most pros tend use forged and bladed heads with solid backs which need a more precise and consistent strike. Forged are hammered into shape from a piece of metal rather cast from a mold. Their heads are also more expensive and less forgiving on off-centre hits but generally deliver a better feel for the consistent ball-striker.

Smaller-sized heads, as crafted into a player iron, can typically be intimidating for the average golfer and hence why these clubs may not be the way forward.

The benefit of a player iron, however, is the ability to shape the ball both ways and to receive superior feel on all shot types. One particular advantage we find with a player iron is workability, particularly in the wind. The feedback from poorly struck shots can also help diagnose any swing flaws you may have.

Adam has more than 20 years experience in playing and teaching golf and his reputation as a coach continues to flourish through improving the skills and enjoyment of golfers at all levels.

Over the last few years Adam's teaching philosophy and desire to help golfers has earned him the position of Head PGA professional at Wokefield Park, where he oversees all aspects of the Academy operation.

Andy and Adam trialled ten different branded player 6-irons in stiff flex and then marked each out five for appearance and out of ten for both feel and performance. For the mathematicians among you, this resulted in a total score out of 25. The pair scored separately without consultation and the score presented for each iron is an average of two.

With each iron, we have also provided details of price, loft, lie angle, length, shaft and grip. The test was carried out in alphabetical order.

If you would like to skip straight to the results page, click this link... 10 of the Best: Player Irons 2014