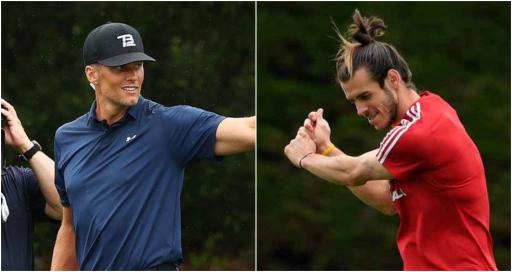 Related: Who is the best golfer from the NFL?

Real Madrid forward Bale once held up a banner after playing for his national side which caused quite a stir.

It read: "Wales. Golf. Madrid" and it didn't go down too well in Spain where he has always had a huge number of critics over his performances.

He has played 176 games for Los Blancos, scoring 81 goals including a memorable overhead kick against Liverpool in the Champions League final in 2018.

That banner saw his relationship plummet to new depths and Spanish media Marca labelled him a "parasite".

Brady is a huge football - or "soccer" - fan and has revealed himself to be a Manchester United supporter.

Brady, who retired recently only to announce a dramatic change of heart, was at Old Trafford as early as March to watch Cristiano Ronaldo score a hat-trick in their 3-2 win over Tottenham.

He said he was going to fist pump if Harry Kane - also a massive golf and NFL fan - scored but wanted United to win.

Brady has confirmed to be returning to The Match VI which will be an all-NFL affair at the Wynn Golf Club.

It will be his third appearance at The Match and he will partner Green Bay Packers quarterback Aaron Rodgers. They will play Josh Allen of the Buffalo Bills and Patrick Mahomes of the Kansas City Chiefs.

Brady decided to pay tribute to Bale's famous banner with his post after announcing golf attire for his new clothing line.