Rick Shiels recently celebrated hitting two million subscribers on YouTube. Check out this artwork made in the sand near The Old Course at St Andrews. 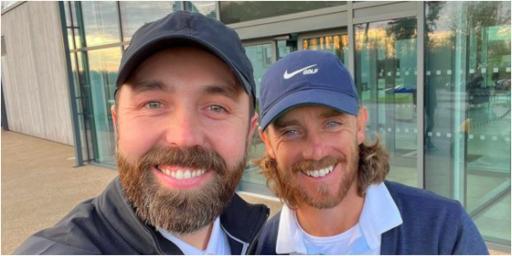 It marks a considerable moment for Shiels, the 35-year-old PGA professional who started his channel to try and get more students.

But over the years his channel has exploded in popularity with Shiels collaborating with the biggest names in golf.

He is widely seen as a go-to person for equipment reviews and news.

Both he and Peter Finch are widely seen as two of the pioneers in YouTube golf content.

Now he has a popular podcast and speaks with some of the biggest names in the sport.

Shiels detailed something pretty spectacular, some artwork at St Andrews on the beach.

Related: How much is Rick Shiels worth?

Check out the pictures below:

WOW this is so cool! Check out this amazing sand art to celebrate 2M subscribers at St Andrews Beach!

Thanks to the amazing Thanks very much @RLOIII
& thanks to my wonderful subscribers! pic.twitter.com/Bm7j0uMzHZ

We wonder how long this artwork took.

Over the years he has made videos with celebrities such as Robbie Williams and strong man Eddie Hall.

He famously was sponsored by Nike but ended his contract with the brand in February 2021.

His prinicple sponsor now is Motocaddy, who sponsor his podcast.

Shiels also has or had deals with Garmin and Mastercard.

It is hard to know exactly how much Shiels is worth, but it has been estimated he is worth up to £2million.

It surely won't be too long until he reaches three million subscribers.