Dustin Johnson appeared to have an amateur moment during the first round of LIV Golf Jeddah at Royal Greens Golf & Country Club. 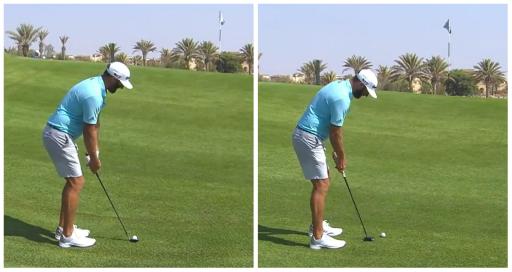 Johnson, 38, spent the earlier part of the week joking about what a terrible decision he had made in joining the breakaway tour.

It was off the back of being confirmed as LIV Golf's individual champion in their inaugural, eight-event season.

It meant that he scooped $18m in bonus cash from his new employers. If you take into account his on-course earnings so far, he's pocketed north of $30m.

"I really regret my decision to come here," Johnson said with his tongue firmly in his cheek. "It's just so terrible."

But there was absolutely nothing funny about this for DJ.

We pick up the action and he's presented with a tricky little pitch. Wedge in hand, you'd bank on him to get this fairly close, spend about 15 minutes reading the putt with his brother and caddie Austin before duly sinking it.

But that's not what transpired. Johnson's first attempt came up well short. "He'll try that again," David Feherty, who also called out the LIV players earlier this year, informs us on the broadcast.

Johnson walks over to his back and wipes his hand on his towel, perhaps just trying to gather his thoughts.

Then he opts to use his TaylorMade Spider Limited Itsy Bitsy. His golf ball bobbles again and is gobbled up in the rough and returns to his feet.

What's surprising is that his third attempt - when he did get it on the green - is actually short!

Us mere mortals would be sending that thing about 20 feet past the hole. In the end, he had to settle for a double bogey five.

Johnson started the 54-hole, shotgun start tournament on the second hole alongside Phacara Kohngwatmai (me neither) and Bryson DeChambeau.

The tournament began only a day after Phil Mickelson came out swinging against the PGA Tour and sporting a henna tattoo that really has to be seen to be believed.