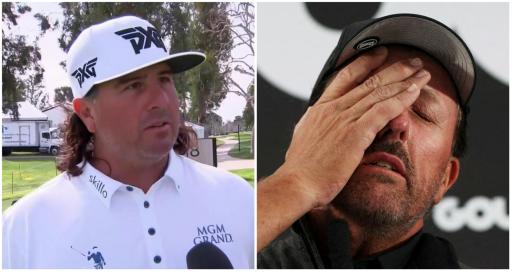 Pat Perez said he felt like he won the lottery when he spoke about ditching the PGA Tour in favour of the LIV Golf Invitational series.

In one helluva tense press conference, Perez sat alongside Brooks Koepka and Patrick Reed where they absolutely ripped the PGA Tour.

“Listen to the players for once,” chimed Reed when asked if there were anything the PGA Tour could have done to avert the biggest existential threat they have ever faced.

“[The PGA Tour] Could have at least taken the call, I think, from the LIV Group. I think at least take a meeting, see what it's all about. Monahan [PGA Tour commissioner] just shut it out from the start. Didn't want to listen, didn't wanna take a meeting, didn't wanna listen to anybody that maybe would have been interested, maybe would have been a little different, I think. I think that's in the end. But -- and he doesn't listen to the players. Somehow the TOUR they keep talking about, oh, yeah, we work for you, we work for the players, we work for the players. It's the opposite. Seems like we work for them. We don't have a say in anything."

Well, it’s fair to say there is absolutely no love lost by Perez.

When asked if he had any issues about the source of the money for the LIV Golf Invitational series, his one-word answer summed it up.

Then he added: “I understand the topics you're trying to bring up, and they're horrible events, but I'm here to play golf. That's my deal. I've got an opportunity to play golf, and that's it.”

Perez also displayed he had absolutely no problem with his decision to join LIV Golf when he turned up to a party later that evening wearing a shirt with dollar bills printed on it:

Pat Perez: “LIV is all about family and spending more time at home”

More: Don't take the Ryder Cup from me, says Westwood

If that doesn’t make you sing a song to yourself about money then I don’t know what will.

Me? I'm thinking that one in WWE.

Whether you agree or disagree about Perez and the other LIV players' choice is up to you.

But can all just agree on one thing?

That shirt is awful.