Phil Mickelson holed a truly monster putt during the open round of LIV Golf's Invitational in Bangkok at Stonehill in Thailand. 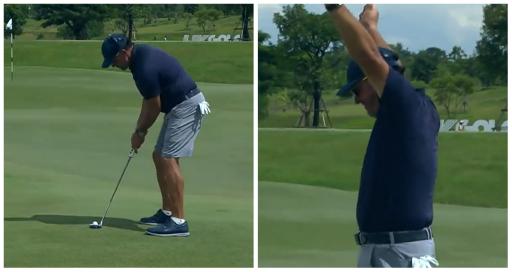 Phil Mickelson proved there is life in the old dog yet as he holed a monster putt during the opening round of LIV Golf Bangkok.

Mickelson was just off the green at the par-4 14th hole at Stonehill when he rolled back the years, sinking this snaking putt.

Unfortunately for Phil the Thrill, he followed up that epic putt with a double bogey at the very next hole on his way to an opening round of 3-under 69 in Thailand.

Related: Poulter says "We've had so many messages of support"

Mickelson's round also contained five birdies and another dropped shot at at the par-3 seventh hole.

Lefty had spent the earlier part of the week backing LIV Golf's new-found "strategic alliance" with the MENA Tour.

It is a partnership that LIV believe will eventually lead to their players being able to start earning world ranking points and an ultimate pathway to the major championships.

Related: What is the MENA Tour?

"I think from a player standpoint, it feels great to have everyone at LIV fighting so hard for the players and their best interests," Mickelson said.

"I think for the world golf rankings, this is a great way to keep its credibility, while not bringing in politics into the decision-making process. I think it's good for all parties."

By day's end in Bangkok, it was Eugenio Lopez-Chacarra (who was ranked the second-best amateur in the world before he signed for LIV), England's Richard Bland and South Africa's Branden Grace who shared the lead on 7-under.

The aforementioned Johnson - who has stated that he believes now the golf world is starting to understand LIV Golf is "not a joke" is five strokes off the lead.