Dustin Johnson on LIV Golf Tour? "We are NOT a joke!"

Dustin Johnson says he believes people are starting to realise the LIV Golf Tour is not a joke as he wades into world rankings debate. 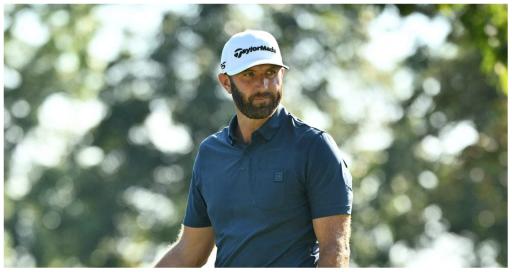 Dustin Johnson says he believes the media and golf world is finally starting to realise the LIV Golf Invitational Series is "not a joke" despite admitting he did not know "what was going on" during their curtain-raising event at Centurion Club in June.

Johnson, who may have recently landed himself in hot water with his glamourous wife Paulina Gretzy with this answer at a LIV press conference, represents one of the truly elite names to have joined the breakaway tour.

He was one of the first to resign his PGA Tour membership and has now played in all six LIV Golf Tour events, winning a truly mind-boggling amount of money. Aside from the fact he reportedly commanded a signing-on fee north of $100m, he has earned $12,525,000 in on-course winnings.

Two-time major champion Johnson, 38, was asked his thoughts as to how he feels LIV has progressed since the early days.

"I mean, I think you could ask anybody. I think for me, it's gone really well. It's gone better than even I expected it to. I think it's just going to keep getting better and keep getting more recognition around the world," said Johnson, who is the captain of the 4 Aces GC side comprising of Pat Perez, Talor Gooch and Patrick Reed.

"I think we're already starting to a lot. I think the media and everybody is starting to finally catch on that this is not a joke, it's real golf, and we've got some of the best players in the world. Obviously we don't have all of them, but we've got enough of them."

He continued: "I think it's gone great. I really enjoy it. I love being out here. I love playing. I love being a part of it and starting something new. I think the team aspect brings a whole different kind of flavour to golf, and it's something that people and fans can get behind, and obviously we're going to play in all different parts of the world."

Reflecting on that first week, where PGA Tour commissioner Jay Monahan announced indefinite suspensions of the LIV players, Johnson said: "The first week was a little -- it was just different. After that week, that was when I started recruiting players to be on my team, because yeah, you're right, I didn't like it, and I wanted to compete and have a chance to win the event.

"But yeah, it was still good. I thought London was great, and it was a really good start, but too, it was the first week. I didn't really know what was going on either too much, but after that I figured it out really quick."

Elsewhere, it appeared that just this week LIV Golf believed they had finally found a way for their players to start earning world ranking points.

Greg Norman's LIV Golf have announced a "strategic alliance" with the MENA Tour.

Related: What is the MENA Tour?

LIV believed that their players could start earning world ranking points from this weekend in Bangkok, but were left with egg on their faces after the Official World Golf Ranking (OWGR) announced they would review the changes.

It means that (for now at least) LIV players still face the prospect of falling further down the OWGR and needing to play elsewhere to try and qualify for golf's four major championships.

Johnson said of the OWGR mess: "I don't see how they don't award us points. Like I said, I think it's supposed to be a non-biased organization, so we are playing golf, competing with some of the best golfers in the world, so yes, we should be awarded points.

"Will they do that? Hopefully. Like I said, I think we deserve them, and hopefully we'll get them."