Seve's old caddie flexes at The Masters: "Just get on with it!"

Matthew Fitzpatrick asked Billy Foster if he "in a rush" during a humourous exchange at The Masters during Friday's second round. 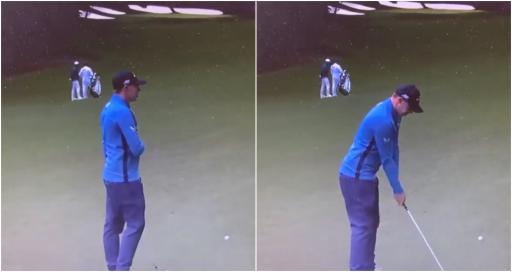 Billy Foster knows a thing or two about caddying at The Masters seeing as he was on the bag for the late, great Severiano Ballesteros.

And with that, he has a wealth of knowledge about how to navigate Augusta National because he was with Ballesteros at five of his Masters' appearances.

Foster has previously told of how Ballesteros was "so professional" and took his practice so seriously in Georgia that at times they took ages to finish.

"My first ever day with him at Augusta was on the Saturday before and Seve played on his own and took seven hours to get round," he previously told the media.

"He hit 10 tee shots, 25 approaches and 100 putts on every green and he had probably played in over 15 Masters by this stage. He was so professional.

"It is ingrained in me now and, whoever I ever caddie for at Augusta, I will always see it through Seve's eyes particularly around the greens."

Foster appeared to be seeing Augusta National through Seve's eyes again during the 2022 Masters.

He now caddies for England's Matthew Fitzpatrick after stints on the bag with Darren Clarke, Lee Westwood, Thomas Bjorn and David Frost.

Tremendous from Billy Foster to ⁦@MattFitz94⁩ imagine how much faster pro golf would be if caddies said, just get on with it. #themasters pic.twitter.com/fFWyCkBvxc

Fitzpatrick was playing his second round and had 243 yards to the pin for his second shot at the par-5 13th hole.

You can tell that Fitzy is perhaps in two minds as he stands there using his club as a cane to assess his options.

Go for it? Lay up? No, Foster knows what the play is. It's a lay up all day long.

"We've decided it's the right play so just get on with it," Foster says.

"Alright, sorry. Are you in a rush?" asks Fitzy.

Fitzpatrick did lay up but sent his pitch a little bit short and had to navigate a tricky two putts for par. He carded a 1-over par 73 and was level par going into moving day in a tie for 16th.