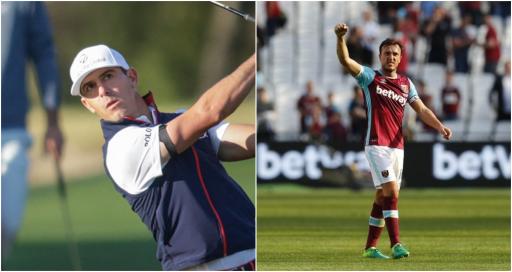 Billy Horschel was so giddy about Tiger Woods' appearance at Augusta National he spoke to West Ham footballer Mark Noble on FaceTime about it.

Horschel was one of the first players to greet Woods when he arrived at the property last Sunday ahead of his "game-time" decision over whether to play.

He gave Woods a bear hug and watched him clip a few shots away before the 15-time major champion headed out for a back nine Sunday stroll.

Woods, 46, was joined by thousands of patrons on Monday when he played a practice round alongside Justin Thomas and Fred Couples.

Judging by the reaction from the ground, for the most part Woods was in good knick and had a more than decent amount of speed and power.

Horschel told the media of Woods: "It's amazing. What word haven't we used to describe Tiger in any form or since? He still amazes us even at, what is he, 46 now?

"With everything he's gone through, with all the injuries and with all the personal stuff, he's always -- he still has that drive and that fire within him to still play golf.

"I was talking to a good friend of mine, Mark Noble, he plays for West Ham Football Club over in England, a team I support, and we were FaceTiming each other last night and we were saying, here's a guy who's made butt-loads of money.

"He's got more money than anyone would need in your life, and after everything he's gone through with the back surgery, before the accident, and now with the car accident coming back, he could have said, you know what, I've done a lot in this game, I don't need to do anything more, but it just shows you how much he loves the game of golf, how much he loves being out here, and how much fire is still within him to play.

"If he was going to be done with golf, it was because he had to leave for some other reason than his back. He wants to come give it his all, and if it's not there anymore, then he can say, hey, I've given it my all and I'm leaving on my own terms, so he's leaving on his own accord."

"I went to it, and I saw him afterwards and we chatted a little bit, and so it's just great to see him. I'm a fan of his. Obviously he's become a really good friend of mine.

"But at the end of the day I'm still a golf fan. He's still a role model of mine. To see him hitting golf balls at Augusta at the Masters, getting ready to play, I don't know if he's playing, I don't know that answer, but to me if I was in his shoes, I wouldn't be doing everything that I am to get ready to try and play this tournament and not play.

"It's awesome to be here. There's always buzz around this place. You guys know this. But there's just another level of buzz to see him and see him play. Shoot, I've thought about it in the past, and I may be on the first tee watching him tee off if my tee time works out and everything just because it's such a special moment.

"We all know this, and I mean, I'm blabbing on about it, but almost two years ago we could have lost a figure in our sport like Kobe Bryant in basketball. It's just great still -- that he's still walking these grounds."