Jason Dufner made mistake at the QBE Shootout we can all relate too!

Jason Dufner accidentally nudged his ball on the putting green at the 2013 QBE Shootout, but what is the ruling here? 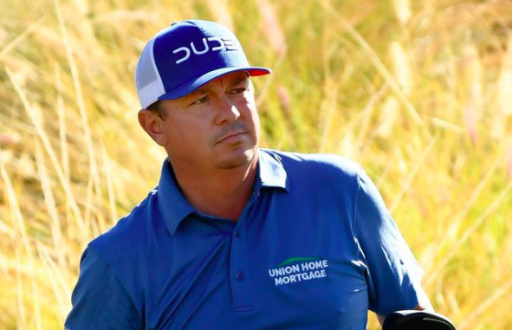 Jason Dufner is one of the most unique characters on the PGA Tour. He made himself famous not just through superb golf, but from his individual waggling technique before hitting his shots.

Once the waggling starts, you know instantly which player is about to hit his shot. Even without his recognisable curly hair, the waggle is always a giveaway.

However, his distinguishable pre-shot routine cost him dearly at the 2013 QBE Shootout, which used to be called the Franklin Templeton Shootout. As you can see in the footage below, Dufner accidentally hit his ball when lining up a putt on the par-4 9th green.

He intended to put his clubhead behind the ball, but he nudged his ball instead. This led to some laughs being shared amongst his playing partners including Dustin Johnson.

RELATED: THIS NEW GOLF SERIES WILL REVOLUTIONIZE AMATEUR GOLF IN THE UNITED STATES

Although it is a funny situation, it begs the question as to whether the 2013 PGA champion was eligible for a penalty for hitting his ball on the green.

Happens to the best of us. pic.twitter.com/39F1us1MJo

In 2013, this would have been a penalty. Before the rules changed, you were assessed a one-stroke penalty if you accidentally moved your ball on the putting green.

If Dufner did the same thing in 2021, he would be able to replace the ball. You should put a ball marker down to mark where the ball was as well.

This rule changed for the 2019 season and it ironed out issues of moving golf balls in windy and tough conditions. It was not clear whether players caused the ball to move or if it was caused by wind.

This new, forgiving rule has removed this grey area. So remember, if you accidentally move your ball on the putting green, put a marker by where the ball was and just start again.

Dufner didn't exactly lose the tournament for his pair. He and Johnson finished second to last at the event in 2013, 16 shots behind Harris English and Matt Kuchar.

NEXT PAGE: 2021 QBE SHOOTOUT: MEET THE TEAMS PLAYING FOR SOME SERIOUS MONEY IN FLORIDA