Jon Rahm jokes he has been watching the TV programme "Suits" to help him better understand LIV Golf's court drama with the PGA Tour. 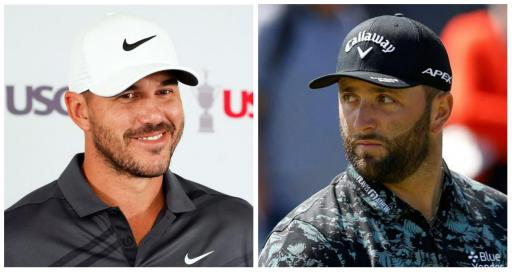 Jon Rahm says he paid "zero attention" to the LIV Golf court ruling and only found out when he saw "10 really nervous people pacing around the room".

The 27-year-old Spaniard has always maintained his futures lies on the PGA Tour. Speaking at Tiger Woods' Genesis Invitational earlier in the season, the former World No.1 insisted he would only talk about the subject once.

In a somewhat peculiar choice of wording, Rahm said he had "pledged his fealty" to the PGA Tour. He has previously described why he doesn't find the controversial series appealing.

"Shotgun three days to me is not a golf tournament, no cut," he said before the U.S. Open at The Country Club at Brookline. "It's that simple."

The LIV battle with the PGA Tour finally saw the courtroom last week. Talor Gooch, Hudson Swafford and Matt Jones had asked for a temporary restraining order to allow them to compete in the FedEx Cup Playoffs as part of the wider antitrust lawsuit.

In short, they lost. Jude Beth Labson Freeman also chided in her written judgement: "If LIV Golf is elite golf's future, what do Plaintiffs care about the dust-collecting trophies of a bygone era?"

What did Rahm think? Would it have been awkward if the ruling went the other way?

"Well, I can tell you I had zero attention on it. I only found out that it was going on because I walked by player dining and I saw about ten really nervous people pacing all around the room and I thought, well, there's something going on," he told the media before the BMW Championship.

"I asked and heard what was going on. But I never really -- I was in the room when the judge made her decision known, but only because I was walking by and they told me it was time. So I was like, yeah, I'll stay.

"I think it could have made things a little bit awkward, yeah. They chose to leave the PGA Tour, they chose to go join another Tour knowing the consequences; and then try to come back and get, you know, courts and justice in the way wouldn't have, I would say, sit extremely well with me.

"But at the same time, they are adults, right. They are free to do as they please, to an extent, and that's what they chose to do. If they are allowed by a judge, I'm nobody to say otherwise.

"Would have been awkward? Possibly, but I guess we'll never know."

Rahm was asked if he got any sense if they are not going to see the LIV Golf guys back for a while.

He told the media: "I mean, it doesn't look like it. I'm confident that the LIV side of things are still going to push strong to keep trying to change some things.

"But [I] also know that the lawyers on the PGA Tour side are going to keep fighting for the way things are going right now.

"It's not the last thing we are going to hear from them, but I don't know. I just started watching the show "Suits," so I'm kind of learning now about what happens in a courtroom."

What does Rahm make of this?

"One of the great things about the PGA Tour is the depth of field," he said.

"And three of them won, but we got Will Zalatoris and Cameron Young, who are two amazing players that have played amazing this year, and the rise of many other great stars.

"So there's always a hungrier future star coming that's willing to put in the work and make themselves known.

"Lack of talent on the PGA Tour and the world of golf is not an issue.

"Again, you might have lost some names, but you're gaining some great golfers. And those two players have done amazing this year and made themselves known.

"I don't think we are essentially losing that much because, like I said, you're just getting to know some great players that were there that you haven't heard of before."

On Monday this week there were reports Tiger Woods was jetting in for a crunch meeting to discuss how to handle LIV Golf.

Rickie Fowler claims that he doesn't believe the PGA Tour have handled the situation well.

Rahm was asked to give some insight on the meeting.

He said: "Boy, news can be wrong sometimes. Yeah, there is a player meeting, but that's all I can tell you about that. There's also a PAC [Players Advisory Council] meeting.

"I don't know if on the news they were talking about the PAC meeting or no. I saw Alan Shipnuck Tweeted something, the most reliable source in golf.

"I don't know what to tell you. I don't have Tiger's phone number, so I can't tell you if he's coming or not."