Cameron Smith has been praised for a classy gesture he made to a patron at the FedEx St. Jude Championship on the PGA Tour. 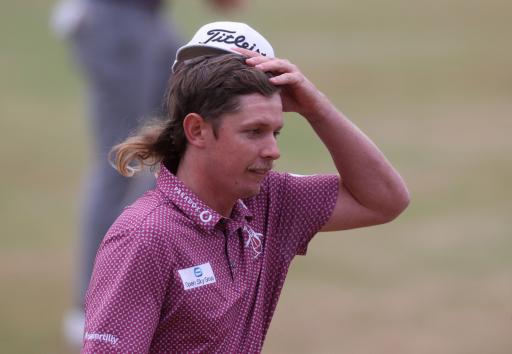 It's reasonable to say Cameron Smith had an interesting time on the PGA Tour last week.

It started with him all-but confirming his future path to the LIV Golf Invitational Series when he said he was "ready to cop some heat".

Then during the first round of play the 28-year-old Australian and World No.1 Scottie Scheffler sent social media into a frenzy.

The reason? Scheffler, in a world of his own and in a mood that previously threatened to reach boiling point, walked in front of Smith as he was trying to read a putt.

It truly was an hilarious moment for golf fans. Was this Scottie freakin Scheffler firing shots?!

No, of course it wasn't. The pair reportedly spoke about the moment in the clubhouse and were thinking of hatching a plan to recreate it. They found it hilarious.

That didn't materialise as both players were grinding hard. Scheffler missed the cut and Smith forced himself into contention.

Then he was on the receiving end of a bizarre rules penalty when he didn't hit his golf ball from the correct position after taking a penalty drop.

Whether or not this was the PGA Tour throwing shade at Smith is clearly subjective. Chief tournament referee Gary Young said it wasn't.

My own personal opinion? It was of course the correct ruling but it was so poorly handled. I mean, 30 minutes before his tee time and you inform him that you are docking him two shots?!

Anyway, what perhaps went unnoticed for many was one of Smith's shots at TPC Southwind during FedEx St. Jude Championship hit a patron and knocked his phone out of his hand, cracking the screen.

Smith reportedly wrote down his number down and offered to buy him a new phone.

Cameron Smith hit a patron @FedExChamp and knocked his phone out of his hand. He proceeded to write his number down and offered to buy him a new phone. Class act by a great player @leggodawgs @brut334 pic.twitter.com/vwh2jPioy7

I mean, the dude has got millions in the bank and likely many more on the way so we think he can afford it.

Only 24 hours after Smith finished T-13 last week, his agent confirmed he has now withdrawn from this week's BMW Championship.

He's struggling with hip issues, though some have suggested he's been sitting awkwardly on his wallet packed full of LIV money.