Rory McIlroy to television host: "I think you just need a drink!"

Rory McIlroy cracked up a television host when he was asked for a cure for the on course jitters in a promotional segment for The Match. 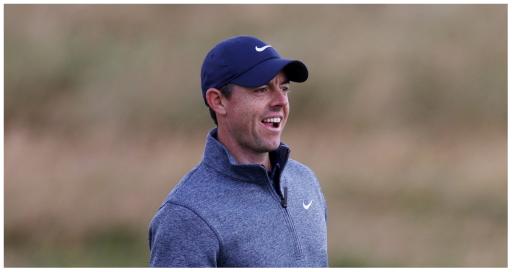 Rory McIlroy cracked up a television host when he was asked for a solution to the on-course jitters.

McIlroy, 33, recently joined Inside The NBA hosted by Ernie Johnson as part of a promotional round for The Match.

The Ulsterman will team up with Tiger Woods - who has recently revealed the funniest thing ever said to him on a golf course - to play Justin Thomas and Jordan Spieth over 12 holes at Pelican Golf Club on 10 December.

It will be the seventh iteration of The Match that started with Phil Mickelson taking on the aforementioned Woods.

Mickelson prevailed in the first edition of the The Match four years ago, defeating Tiger in a playoff after they were all-square after 22 holes.

Now Mickelson has been booted out of the franchise because of his association with LIV Golf.

But back to the topic at hand and McIlroy was asked by Johnson what to do if - even on No. 14 tee - you still have a case of the dreaded jitters.

Are you a lose cause at this point? McIlroy told Johnson:

"I think you just need a drink. I think that could keep those jitters at bay."

Ernie: "If I've still got the jitters on the 14th tee, am I a lost cause"
Rory: "I think you just need a drink" pic.twitter.com/k5GGqPJuc0

You probably could have guessed this was going to be McIlroy's response but it was a funny moment nonetheless.

It has been a busy year for McIlroy and Woods but The Match should provide for some great entertainment.

Woods' own participation was thrown into doubt after he developed plantar fasciitis earlier in the month, forcing him to withdraw from the Hero World Challenge on the PGA Tour.

He said he was confident he would be able to compete at Pelican Golf Club and then team up with his son Charlie Woods to play the PNC Championship later in the month.

Tiger will be able to use a cart for The Match. This will be his third appearance in the made-for-TV event. It will be McIlroy's first.

It will also be the first time that Spieth and Thomas participate.

Next page: Tiger and Charlie give first ever joint interview