Rory McIlroy did not like this question about Sergio Garcia one bit: "No way!"

Rory McIlroy says there's "no way" Sergio Garcia should be picked for the 2023 Ryder Cup after his relationship deteriorated with the LIV Golf player. 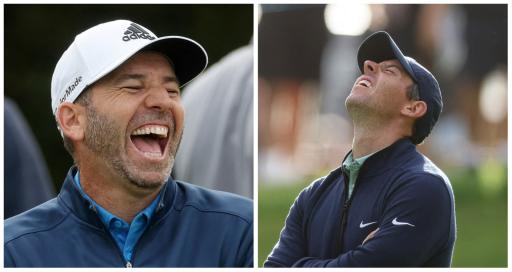 Rory McIlroy had a one-word answer when he was asked if Sergio Garcia should be picked for the 2023 Ryder Cup side: no.

McIlroy, 33, didn't want to go into details about his relationship with Garcia that now appears to have completely broken down and it cannot be rekindled.

DP World Tour chief executive Keith Pelley threw a potential lifeline towards Garcia earlier in the week when he confirmed that as an honorary member of the tour the Spaniard could still be eligible for one of Luke Donald's six captain's picks.

But it appears that McIlroy doesn't want Europe's record points scorer anywhere near the Marco Simone Golf & Country Club in Rome this September.

McIlroy was asked about his relationship with Garcia as he revealed his version of events after refusing to acknowledge Patrick Reed on the range at Emirates Golf Club ahead of the Hero Dubai Desert Classic.

McIlroy described the exchange as a "storm in a teacup" but confirmed he simply didn't want to talk to the LIV Golfer after revealing a subpoena was delivered to the Northern Irishman on Christmas Eve.

The four-time major champion said he was enjoying his time off with wife Erica Stoll and daughter Poppy when the letter arrived.

"You're not going to take that well," said McIlroy before he was asked about Garcia.

Should Garcia be picked? McIlroy responded by just saying: "No."

Pressed further, McIlroy shook his head and said: "No way".

McIlroy and Garcia were once extremely close. So much so, McIlroy was an usher at Garcia's wedding.

The Ulsterman made his Ryder Cup debut in 2010 and has appeared in four winning sides with the 2017 Masters champion.

But reports have emerged explaining that it turned "bitter and personal" in both directions.

In December, McIlroy said one morning he woke up to text messages from Garcia telling him to "shut up" about LIV.

McIlroy said of that: "I was pretty offended and sent him back a couple of daggers and that was it."

Garcia was in the news again this week as it was confirmed he is no longer fighting his DP World Tour ban.

McIlroy took centre stage in 2022 as the PGA Tour grappled with their mega-rich rival.

He said that he felt "emotionally drained".

Asked whether that was from LIV or the pressure of trying to end his major championship drought, McIlroy said: "All of it, all of it."

"I mean, I think there is -- on reflection last year, I felt like I needed to take on quite a lot.
"But I think getting the wheels in motion of how hopefully the new system and the new -- yeah, I keep calling it a product, but the new structure of professional golf, like getting those wheels in motion, it look a lot of effort last year, but now those wheels are in motion.
"We just have to try to tidy up the schedule for 2024. But I feel like most of the heavy lifting was done last year.
"We still have quite a bit of work to do, but you know hopefully this year it won't be quite as taxing."