World No. 1 Jon Rahm endures HORROR START on day one of Andalucia Masters

Jon Rahm returned to the European Tour at Valderrama on Thursday but plummeted down the leaderboard with a staggering 78. 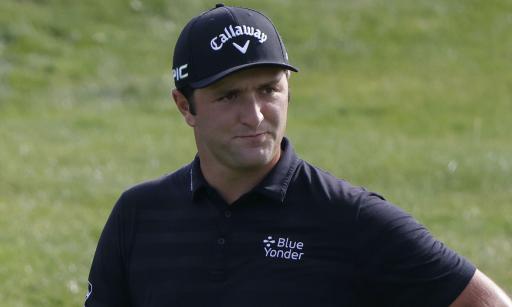 World No. 1 Jon Rahm made a nightmare start to the Estrella Damm N.A. Andalucía Masters, shooting a poor round of 78 on day one.

Arriving at Valderrama off the back of a tied 17th finish at the Acciona Open de España in Madrid last week, Rahm was unable to thrill the Spanish crowd with four bogeys in his first six holes.

He added a double-bogey at the par-4 18th hole, which was his ninth hole of the day. After playing nine holes in 42 shots, he managed to steady the ship with six consecutive pars at the start of his second nine holes.

However, the US Open champion made another bogey at the par-4 7th hole and parred the final two holes to finish with a 7-over-par 78.

Scoring was drastically higher when compared to last week's tournament in Madrid. The tight fairways, narrow tree lines and high winds of this former Ryder Cup venue were proving hard to negotiate.

When Rahm finished his round, he was 11 shots behind leader Julien Guerrier who shot 4-under-par on Thursday. The Frenchman made six birdies and two bogeys to set the early mark in the clubhouse.

RELATED: "I'D BE ASTOUNDED IF TIGER WOODS MAKES THE MASTERS": OLYMPIC OSTEOPATH EXCLUSIVE

Englishman Andy Sullivan also severely struggled on the first day at Valderrama. He carded five bogeys and two double-bogeys on his way to an uncharacteristic 80.

NEXT PAGE: RORY MCILROY CERTAIN HE IS "BEST PLAYER IN THE WORLD" BEFORE PGA TOUR COMEBACK