This is perhaps one of the funniest things we've seen in a long time... 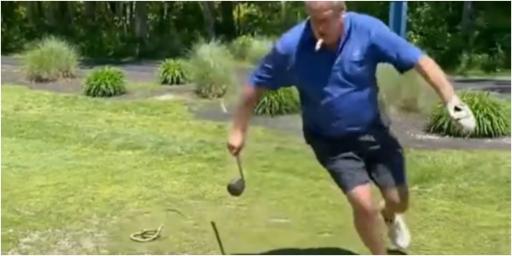 Picture the scene: you're on the tee box all ready to rip one down the fair way with the big stick, then all of a sudden a snake appears and starts chasing you.

This happened recently to one player. Except it wasn't a real one. It was a fake one. Yep, this player fell for one of the oldest tricks in the book but it is still in our view absolutely hilarious. How did this go on for so long?

Our central character is a man who is dressed in blue, with white golf shoes on and he's got a cigar on the go. His pals already know that he has a fear of those creatures and they take it out on him in a cruel way.

"What the f*** is it," the golfer says before he realises it's a snake that is giving chase. He runs around wildly trying to get away from the plastic snake for what seems like an eternity. His pals really got him with this one, didn't they?

His pals finally let him know it's fake but the player still doesn't appear to believe them, asking them if it's on his back before using his driver to smack the plastic animal which was attached to his person with a piece of string.

Dude had to sleep for about two days straight after that

He'll be nice and composed after that tee shot

Why your round of golf takes six hours...

Golf news
YouTube golf content creator Bubbie Golf almost DUNKS it on par-4
Golf news
Golf coach hits shots through wife's MINIVAN to simulate pressure
Golf news
Amateur golfer demonstrates PERFECTLY what 2021 felt like as a golf swing
Equipment news
Is this the coolest pitch mark repairer you have ever seen?
Golf news
Golfer FALLS INTO THE NET at Topgolf with a beer in his hand and gets kicked out