Justin Thomas explains that shot on the range at Augusta National and responds to Jon Rahm's jokey comments about Tiger Woods. 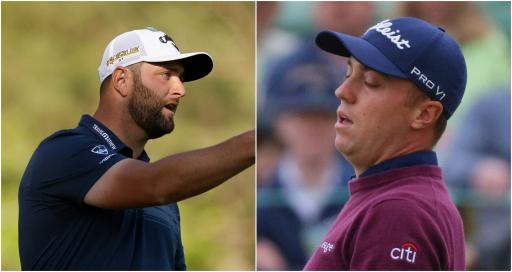 Justin Thomas says he did not top a shot at the Masters as he touched upon the “private tuition” he receives from Tiger Woods which ruffled Jon Rahm’s feathers.

It was a peculiar clip that did the rounds. With a fairway wood in his hand, Thomas swings away and on first viewing it looks like he stone tops one on the range at Augusta National.

One of the best players in the world, on a Sunday, ahead of his final round at one of the most iconic courses on God’s green earth, did something most amateurs do every other shot.

But everything was not as it seemed. Watch closely and you can see a second ball dribble out of the corner of the screen. Still, Thomas did look a tad bit surprised. And golf fans got a kick out of it.

It was all the more humorous as the broadcasters discussed whether he could go out and shoot a 65 just before the cameras caught him apparently topping it.

Thomas, who celebrated his birthday this week and is now 29 years old, recently joined Golf Digest’s Be Right podcast where he finally broke down what happened.

“Yeah, yeah, people were out of it that I did it. If that makes you feel better to say that I did it then go for it,” Thomas said.

So where did the other ball come from?

“Yeah, I set it there. I was doing…it’s a drill that I do, I’m swinging to the outside from the inside. So, there’s like, a ball, right beside my ball because I was heeling everything that day,” he said.

“I put a ball on the inside because, naturally your athleticism or your instincts are going to try to swing away from that object that’s in your way. I just clipped it.

“And that’s where it was, it looked like I topped it but people got a good kick out of that one.”

Thomas was also asked about Rahm’s comments about asking Woods for advice.

Rahm joked that he would ask the big cat for some help and receive barely any information before seeing Thomas receive “an entire dissertation” from the 15-time major champion.

“Yeah, I mean, I don’t really have anything to say to it. It was just, er… I know he was just joking around or whatever but at the same time… yeah I don’t know what to tell you,” he said.

“I’ve still asked him [Woods] plenty of questions that he hasn’t answered. But, I mean, I’m very lucky to do so but at the same time I’m not exactly pushing for him to be telling other people stuff that he tells me.

“Just like I don’t tell people plenty of stuff if I think that’s it’s going to help them to potentially beat me. That’s not my problem that you don’t know it. Go figure it out.”