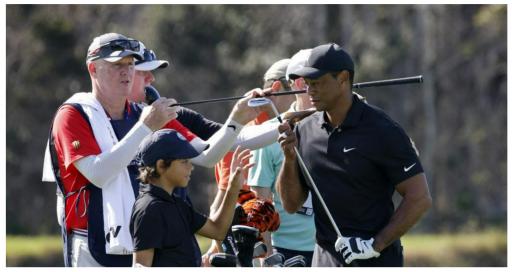 Charlie Woods may not have won the Notah Begay III Junior Golf Championship with dad Tiger Woods on the bag but it does appear he can already bomb it way past his peers.

Charlie sent the Internet buzzing with excitement earlier in the week when footage emerged of his swing with dad Tiger enthusiastically taking to his caddying duties at Koasati Pines in Coushatta, Southwest Louisiana.

His golf swing was already drawing comparisons with the likes of Rory McIlroy.

Related: Everything you need to know about The Match

The tournament was filmed by Golf Channel and we are led to believe footage will be broadcast in December.

Of course there were a few people out there on the course taking a few sneaky pictures and videos.

Like this one from TikTok user dischoaks, who captured this moment Charlie is waiting for his playing competitors to play their approach shots after what looked like an enormous drive.

Just take a look at this:

Speaking of Tiger, the 15-time major champion has confirmed his return to golf and will very likely play three times in December.

Will Zalatoris had to withdraw from the tournament in Albany, Bahamas and was replaced by Shane Lowry.

Woods is also likely to participate with Charlie once again at the 2022 PNC Championship.

He has also confirmed that he will be teaming up with McIlroy to play against Jordan Spieth and Justin Thomas in the latest iteration of The Match.

AND ANOTHER CLIP HERE:

Tiger spoke about Charlie's progress when he gave his first interview to GolfDigest after his car crash.

At the time, Tiger was saying Charlie would let his frustration carry over to "the next shot" if he hit a bad one.

So he gave him this advice:

"Son, I don't care how mad you get. Your head could blow off for all I care, just as long as you're 100 percent committed to the next shot. That next shot should be the most important shot in your life. It should be more important than breathing."

More important than breathing? Okay then.

It remains to be seen just how far Charlie can go in the game. British pro Eddie Pepperell said this week he's already got a wager on Charlie winning a PGA Tour title.

Jon Rahm previously claimed Charlie was better than he was at his age.

In all honesty it doesn't matter whatsoever. It's just great to see (relatively healthy?) Tiger and Charlie on the golf course.