Bryson DeChambeau's previous statements about "inaccurate reports" don't hold up to scrutiny, according to court documents filed by LIV Golf. 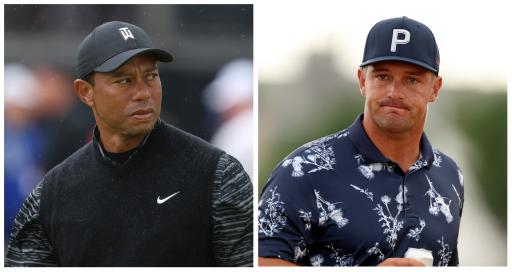 Cast your mind back to February and you may remember Bryson DeChambeau was one of a number of elite players frantically releasing public statements confirming their "loyalty" to the PGA Tour.

The popular golf podcast No Laying Up discussed the fact that DeChambeau had allegedly already made his mind up and had played his last ever PGA Tour event.

We ran the story and DeChambeau, apparently within minutes of seeing the speculation, took to social media on 14 February to post this:

It was only a week later that Phil Mickelson's controversial comments were published by The Firepit Collective describing his Saudi colleagues as "scary motherf------".

Lefty also claimed that he wasn't sure if he wanted LIV Golf to succeed as primarily he wanted to use the circuit as leverage to force the PGA Tour into change.

DeChambeau was not alone in releasing statements about his so-called "loyalty" to the PGA Tour.

Dustin Johnson confirmed his apparent future with a statement that was definitely written by him.

By now, we know exactly what has happened. DeChambeau has signed a deal with LIV Golf in a deal reportedly worth north of $125million.

The increased prize purses by the PGA Tour for the 2023-2024 season will have some people claiming Mickelson's real change has happened.

Although that will have come at a huge cost to Lefty.

Now Mickelson, DeChambeau and nine other LIV Golf players have filed an antitrust lawsuit against the PGA Tour.

There are some incredible revelations within the lawsuit.

Chief of which, Mickelson was in fact suspended by the PGA Tour.

But there is this gem, on page 166, that raises questions about when DeChambeau had signed for LIV.

The Tour’s threats of punishment and career destruction greatly affected LIV Golf’s ability to sign enough elite professional golfers to fill out its League. Some players (including Plaintiff DeChambeau) who had previously signed contracts with LIV Golf were forced to publicly profess loyalty to the Tour. Other players who had previously agreed in principle to all terms with LIV Golf informed LIV Golf that they now could not sign, and instead publicly professed loyalty to the Tour. Players who had been enthusiastic about joining LIV Golf informed LIV Golf that they regrettably could not join in light of these threats. Just as Commissioner Monahan had predicted in his 2020 Memorandum outlining the PGA Tour’s plan to attack a new entrant, a competing tour without player support would prove unable to pose a competitive threat to the PGA Tour.

According to this document, this all but confirms that when that the drama unfolded surrounding Mickelson, DeChambeau had already signed some kind of contract with LIV Golf.

Did the controversy scare him? It certainly is interesting.

To this writer, it does appear that DeChambeau's claims about "inaccurate reports" weren't sincere.

Next page: LIV Golf players are "living in a fantasy land"