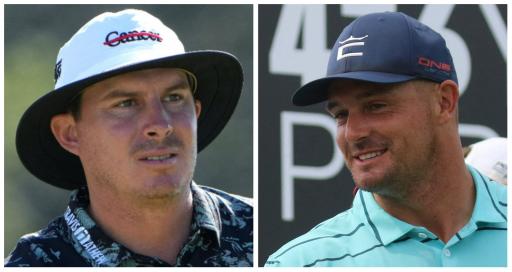 Dahmen took to social media to post an interesting photograph. If you weren't in the know, perhaps you would be none the wiser.

But it's 100 per cent a swipe towards LIV Golf player Bryson DeChambeau, who turned heads last week in a Fox News interview.

He also used, in this writer's opinion, a rather confused analogy. Something about pizza and an economic model, I don't really know.

The 2020 U.S. Open champion is one of 11 players who have filed an antitrust lawsuit against the PGA Tour.

There were some pretty explosive revelations within that lawsuit. One related to Phil Mickelson's alleged recruitment of LIV players.

Whilst there were also some questions raised about when exactly DeChambeau signed for LIV Golf and his subsequent posts about "loyalty".

This is what Dahmen posted:

I tried a new pizza place, should I sue the old one?! pic.twitter.com/CPyunX949h

This is how DeChambeau explained it:

"It's so weird, because it's like -- let's use this as a reference. I heard this earlier this week. You have a pizza shop that's been in existence for 50 years. And all the customers go to it and it's a great product. All of a sudden, a new pizza shop opens up, right?And they start paying the customers to come eat at their place, and that pizza is potentially a little bit better of a pizza, right? And then, all of a sudden, that original pizza house goes, if you go over there, we're banning you from ever coming back to our pizza shop. What's wrong with that economic model?"