Phil Mickelson, Bryson DeChambeau are among a group of 11 LIV Golf players suing the PGA Tour. Here are five of the biggest bombshells from the lawsuit... 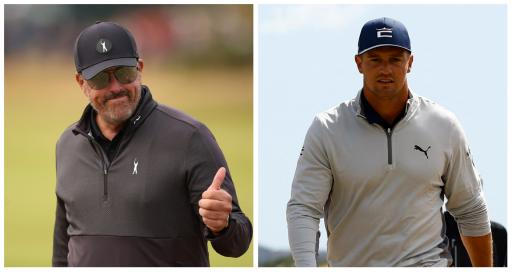 Professional golf will finally make its way to the courtroom after 11 LIV Golf players filed an antitrust lawsuit against the PGA Tour.

Phil Mickelson, as widely expected, is one of the plaintiffs in the suit. Bryson DeChambeau is also named, alleging anticompetitive practices.

Ever since LIV Golf was announced, or the Saudi Golf League as the PGA Tour commissioner Jay Monahan likes to call it, we always knew one thing.

This was inevitably going to be sorted out with a judge and jury. There are billions of dollars at stake and nobody wants to give up without a fight.

There were a number of bombshells within the lawsuit, which is 105 pages long. Chief of which was the punishment dished out to Mickelson.

According to the docs, Lefty was suspended on 22 March. After two months, he was allowed to apply for reinstatement, which he did.

The reason for the first suspension was for allegedly trying to recruit players to LIV Golf. In June, Mickelson applied for reinstatement.

It was swiftly rejected. This time it was because Mickelson had teed it up in the inaugural event at the LIV Golf London Invitational at Centurion Club.

At that point, Mickelson was not able to apply for reinstatement until 31 March 2024. Crikey.

One has to wonder if DeChambeau will also be sanctioned for this bizarre analogy in which he compared LIV Golf to a pizza shop.

Here are five other revelations from the lawsuit:

Scroll down for more...

DeChambeau had already released a statement on 20 February stating "as long as the best players in the world are playing on the PGA Tour, so will I."

But according to the court documents DeChambeau had already signed some sort of deal with LIV Golf at that point.

The lawsuit goes further by stating that DeChambeau was "forced to publicly express loyalty to the PGA Tour".

Yeah...we're gonna need to learn a bit more about that!

DeChambeau also appeared to have been sanctioned by the PGA Tour purely for speaking to others of the positive experience he had with LIV Golf.

Fred Ridley appeared to do his level best to try and dodge questions about LIV Golf before the 86th Masters.

Ridley claimed that Augusta National's approach would always be to do what is best for the game of golf, hinting that just maybe they wouldn't be thinking of banning players.

But per the lawsuit, his public comments are completely at odds with what he was allegedly doing in private.

Apparently, Augusta National had representatives present in an "emergency meeting" of the PGA Tour's Advisory Council.

The filings also allege that Ridley "personally instructed a number of participants in the 2022 Masters not to play in the LIV Golf Invitational Series".

Not all of the LIV players are involved

But even those that haven't and are LIV Golf players haven't been named in the suit.

Gooch, Swafford and Jones were the three PGA Tour players named who wanted a temporary restraining order to allow them to compete in the FedEx Cup Playoffs.

What's interesting is that some of the guys who have been the most outspoken about this all haven't been named.

No Poulter. No Brooks Koepka. No Sergio Garcia, Lee Westwood or Henrik Stenson.

That's not to say that at some point they won't get involved. They simply might not be interested in taking action at this juncture.

The DP World Tour may not be named as the defendant in this lawsuit, but that doesn't stop LIV Golf labelling their "alliance" with the PGA Tour as being "unlawful".

The term is littered throughout the documents. The infamous "Malta meeting" is also referenced in this extract.

Per the documents, the DP World Tour chief executive Keith Pelley met with sponsors of LIV Golf in July 2021.

Because of COVID-19 restrictions at the time, the meeting had to take place there.

You can read the explosive details about that meeting here.

This was before the DP World Tour announced a multi-year extension to their "strategic alliance" with the PGA Tour.

There are multiple references to quotes players have given over the last couple of years.

In January 2019, Rory McIlroy told The Independent that he believed the European Tour was "a stepping stone".

This will likely be argued by LIV Golf's lawyers that the PGA Tour have dominance in the market.

Paul McGinley's comments about Phil Mickelson were also referenced, in which the Irishman implored Lefty to back track over his Saudi comments.

Jordan Spieth's remarks are also touched upon, saying that although he viewed Saudi investment as "a threat", it could also benefit in the long term.

Heck, even Davis Love III's comments a few days before the lawsuit was filed in California were wedged in.

Everything that Jay Monahan has said and will say will be used in this lawsuit.

What do you make of all this? Join the debate.