Just 48 hours after winning the LIV Golf Team Championship, 4 Aces GC captain Dustin Johnson has decided to shake up his team for 2023. 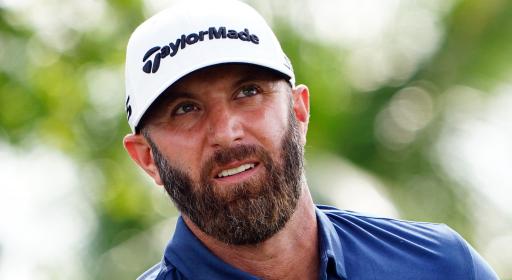 Dustin Johnson has already decided to shake up his victorious 4 Aces GC side ahead of the 2023 LIV Golf League by trading Talor Gooch for Peter Uihlein, according to a report in ESPN.

It marked their fifth team victory of the inaugural LIV Golf Tour season.

Even Perez himself contributed this time, and he wanted everyone to know about it.

Johnson's wife Paulina Gretzky got particularly excited about it all as she took to Instagram to post a steamy pic.

No wonder. Her husband DJ, who reportedly signed a deal in the region of $150 million to leave the PGA Tour and join LIV Golf earlier this year, pocketed more than $35 million in tournament earnings this season.

That was despite him saying he "didn't play his best", a potentially ominous sign for the rest of his peers should he find his A-game.

But now some 48 hours after popping champagne corks and receiving a mammoth first prize of $16 million, Johnson's 4 Aces are reshuffling the pack.

According to a report in ESPN, Gooch is being traded out for Uihlein, who has been playing for Brooks Koepka's Smash GC this season.

Uihlein is a former World No.1-ranked amateur who won the 2010 US Amateur.

Since then he has only won once on the DP World Tour, coming at the 2013 Madeira Islands Open.

Uihlein has never won a PGA Tour title, while Gooch has one to his name at the 2021 RSM Classic.

Not that OWGR points matter where LIV Golf players are concerned right now, but Gooch is ranked 39th compared to Uihlein at 343rd.

Despite not picking up a win, Uihlein certainly enjoyed a strong season on LIV Golf by earning more than $12.8 million in total prize money.

He finished third in the season-long points race and that earned him a $4 million bonus.

With Uihlein now out the door, it means there is a vacant space in Koepka's team, which also includes his brother Chase Koepka and Jason Kokrak.

Perhaps that space will go to one of the four new PGA Tour players (apparently) on their way.

Gooch will now be moving over to Niblicks GC, which is captained by two-time Masters champion Bubba Watson.

The American played some equally solid golf on LIV Golf this season, amassing just over $10 million in total prize money.

Just don't ask him about sportswashing.

He's not sure about all that.

One PGA Tour pro certainly isn't missing Gooch a great deal on the other side.

In fact he wants to punch him.

Pat Perez is enjoying himself on the LIV Golf Tour

ESPN understands that both Reed and Perez will remain with Johnson (and Uihlein) on 4 Aces GC.

It is also understood from the report that Watson wants to change the team name of the Niblicks before the start of the new season.

Watson has acted as a non-playing captain of the Niblicks this season as he recovers from injury, and he has been acting as a stand-in on-course commentator.

They crashed out at the first hurdle at the LIV Golf Team Championship last week, and Varner III was left fuming from what he saw from Piot.

Given those frosty words from Varner III, you would have to feel as though Piot's days on the team are numbered.

LIV Golf executives told the media last week that there will be a number of key changes made in 2023.

One of them is a move to 60 players with all teams afforded one substitute player. Check out the other changes here.

The new season will begin in February after the NFL's Super Bowl, and it will run through to September before the Ryder Cup.

Next Page: Phil Mickelson talks up 2023 LIV Golf League - "A lot of stuff is going to happen"