Did you know about this golf rule Rory McIlroy used at The Players?

Rory McIlroy knew this golf rule but it cost Keegan Bradley at The Players Championship at TPC Sawgrass. 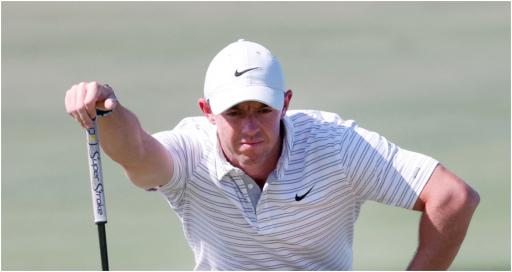 McIlroy had a Players Championship at TPC Sawgrass to forget. He made the cut (barely) and was on the foul end of the draw.

During the second round of the tournament, McIlroy was faced with a 37-foot putt for birdie at the Stadium Course's 12th hole.

McIlroy, 32, marked his ball, lifted it and put it back where it belonged. He stalked the hole, trying to get a read of the putt.

As he did so, a gust of wind moved the ball approximately three feet. Under Rules of Golf, specifically 13.1d, there was no penalty.

This was a change that came into force in 2017. The previous rule meant that players had to play the ball where it lied if it was moved by a natural force.

If McIlroy did not mark his ball, that is how he would have had to proceed. After a brief chat with a tournament referee, McIlroy got to move his ball back.

From there, he made a par. Which leads us to Keegan Bradley.

Read more about what happened to Bradley here.

Bradley was playing the 16th hole in his second round. He marked his golf ball on the green but DID NOT lift and replace it and the ball was moved by a gust of wind.

Bradley moved the ball back to his mark, but because he had had not done what McIlroy had done he was in violation of Rule 9.4a.

He should have played the ball in its new spot. Bradley was given a two-shot penalty and made a double bogey. Yikes.

More: How Rory McIlroy spent rain delays at The Players

What did Bradley say about it all?

"Well, apparently the rule is -- I thought as long as everyone in my group, and I guarantee most of the entire field thought the USGA changed the rule to simplify it, put your coin down, that's where your ball is," he said.

"So put my coin down, the ball moved, a huge gust of wind came up. I looked at the guys in my group and we all said, yep, the coin was down first, all good.

"Didn't think about it again until Gary [referee] came up and spoke to me on two, and [I am] proud of the way I handled that because that was tough news, especially with some tough holes in front of me."

What precisely does Rule 13.1d say?

Under Rule 13.1d(1) examples of actions that are accidental include when:

A player's ball is on the putting green and he or she has interference from an abnormal course condition. The player decides to take free relief under Rule 16.1d. Once the ball is placed, it is treated as if it has been lifted and replaced under Rule 13.1d(2).