Paulina Gretzky sets pulses racing on Instagram as he shows off her custom-built bar at home with Dustin Johnson. 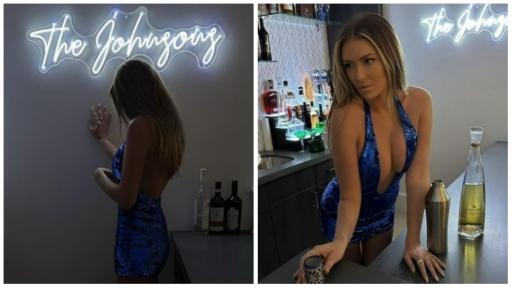 Paulina Gretzky has taken to Instagram in a dazzling blue cocktail dress to show off her custom-built bar named 'The Johnsons' at home with LIV Golf star Dustin Johnson.

Gretzky, 33, set pulses racing with her latest Instagram post that showed a glimpse into the home she shares with Johnson, 38.

She posted a series of four pictures and captioned the post 'after hours'.

Gretzky and Johnson tied the knot in an extravagant wedding in April this year after having been engaged for nine years.

Paulina also showed off some previously unseen photography from the big day on her social media page earlier this month.

If you didn't know, Paulina is the daughter of ice hockey legend Wayne Gretzky.

Johnson and Gretzky have two sons together, Tatum and River.

Johnson famously resigned from the PGA Tour before he married Paulina in a multi-year deal reportedly worth $150m.

Now he is the team captain of the 4 Aces GC side, who have quickly established themselves as the most successful side on the Saudi-backed circuit.

Paulina posted some steamy pics on Instagram after her husband boosted their net worth once more in the season finale.

DJ has already shaken up his team ahead of the 2023 LIV Golf League by axing one of his players in favour of Peter Uihlein.

Despite making more than $35 million in tournament earnings on LIV Golf in 2022, Johnson admitted he "didn't play his best".

Former World No.1 and two-time major champion Johnson, who has now terminated his PGA Tour membership following the move to the breakaway tour, has now slipped all the way down to 38th in the Official World Golf Rankings (OWGR) as a result of LIV Golf being shut out of receiving points (at least for now).

Johnson's brother and caddie recently said he is the "most-spoiled caddie in history" after the conclusion of LIV Golf's inaugural season.

Austin Johnson has been by DJ's side since 2013 after the 2020 Masters champion had a brief stint with Tiger Woods' caddie Joe LaCava.

The Johnson pairing have had considerable success, with Dustin winning as many as 24 PGA Tour events and two major championships before the 38-year-old American upped sticks and departed for pastures new with LIV Golf.