Cameron Young forced himself into contention with a stunning 63 in the second round of the Rocket Mortgage Classic on the PGA Tour. 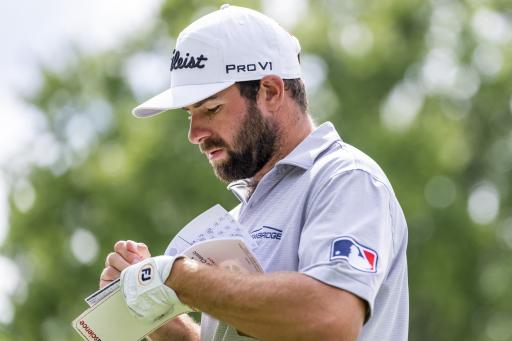 Cameron Young forced himself into contention heading into the weekend at the Rocket Mortgage Classic on the PGA Tour.

Young, who impressed with a second place finish at the 150th Open Championship at St Andrews behind Cameron Smith, shot a 9-under 63 on Friday after opening with a 71.

The PGA Tour rookie made three consecutive birdies from the third hole at Detroit Golf Club and notched another birdie at the seventh hole to turn in 32.

His superb round was highlighted with an eagle hole-out at the par-4 13th hole from 135 yards. After 36 holes here, he finds himself at 10-under par going into moving day.

Young is being chased by Sahith Theegala, who shot a 5-under par 67 to add to his opening 68. Adam Scott and Charley Hoffman, who caused a stir earlier in the season, are also inside the top-5.

At the time of writing Tony Finau was waiting to tee off and was looking to forge a lead to try and take down his second win in as many weeks.

Finau, 25, captured his third PGA Tour victory at the 3M Open last week with a clutch performance on the back nine that included an incredible stroke of luck at the 71st hole and a collapse from Scott Piercy.

The projected cut stood at 3-under, with Patrick Cantlay, Luke Donald, who recently took a pop at Henrik Stenson, and Kevin Kisner all with work to do to make it through to the weekend.

The winner here picks up $1,512,000, which is a huge contrast to the $4million that the winner of the LIV Golf invitational in Bedminster, New Jersey will pick up.

Former Rocket Mortgage ambassador Bryson DeChambeau is due to make his second start with the controversial series.

This week he spoke about his apparent deteriorating relationship with Tiger Woods after it was confirmed the 28-year-old was signing a multi-year, lucrative deal with LIV.

Check out the full prize purses of the Rocket Mortgage Classic.

Speaking after a solid second round, Theegala joked to the media that on the front nine (his back nine) he was playing like "a five handicap".

Is he allowing himself to think about claiming his first PGA Tour win?

He told the media: "Honestly, never. My whole life I've never really allowed myself to get ahead.

"I think a lot of the guys who are prolific winners out here will say the same thing. They're not really thinking about the win unless it's really late on Sunday on the back nine and all of a sudden those guys find themselves on the top of the leaderboard and they find a way to close.

"Honestly, even my mindset coming into the weeks is not to win. I feel there's so much more to my game that I have to progress.

"I was joking with Carl [caddie], I played like a five handicap on that front nine today, I was blading wedges, flopping drivers.

"It was gnarly. But it was just cool to see I have a lot of room to improve. Yeah, so I'm not too worried about the win. If I'm able to get it sometime soon, then awesome."