Rory McIlroy explained how he could save amateur golfers five to 10 shots with this approach, even though it might be "boring". 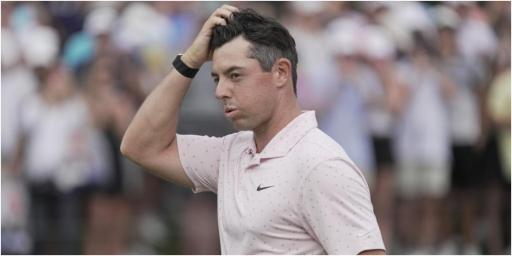 That's why he - and the rest of the game's elite - take the percentage play to get the lowest score possible given any situation.

It's an approach that is often overlooked. Us amateur hacks will at times try and play the hero shot when in fact a more restrained approach is necessary.

There is a member at my golf club who rubbishes this theory. When I'm at the pearly gates, he says, I don't want to say I laid up on every par-5.

It's an admirable approach in many ways but often leads to said member blowing up as he attempts to play simply ridiculous shots in a bid to win.

McIlroy, 32, a TaylorMade staffer, recently joined Andy Proudman and Piers Ward on their YouTube channel to film some content.

Golf Betting Tips: Best bets to WIN the 2022 US PGA Championship
Do you need a new pair of GOLF SHORTS for your game this summer?

There, he discussed how he could save amateurs at least 10 shots per round if he were to caddie for them just based on decision making.

Clearly, McIlroy could be alluding to the time he was convinced to hold fire, take a breather and assess the situation at Wells Fargo in 2021.

McIlroy's drive on the final hole left him in a penalty area. McIlroy wanted to go for it but his caddie Harry Diamond convinced him to take a drop.

The Northern Irishman later credited Diamond with the win. McIlroy said at the time: "So he sort of calmed me down and slowed me down a little bit and said, 'Pal, let's just think about this a little bit.'"

"Playing the shot that you know you can play, or that you can pull off at least eight times out of 10.

"I think I see, I see amateurs so much trying to play outside of their comfort zone and trying to take on shots that they think they should hit instead of keeping the ball in play, you know, managing their games a little better and that will produce lower scores.

"And yeah, sometimes it's fun to take on shots that you might be able to pull off, but I think it's even more fun to just shoot better scores.

"You know, I think that it's a - there's so many other parts of the game that you can do really well at. And yeah, just managing your game a little better.

"If I were to caddie for like an average player, I really feel like I could take five to 10 shots off a round very easily."